Generation blue begins.  There are no additional rules for this generation other than the legacy starter rules.  Which are in a nutshell… make a sim, put them on a 5×5 lot, buy what little you can with what’s left, get them a job, must have an NPC mate when you find one, ect. 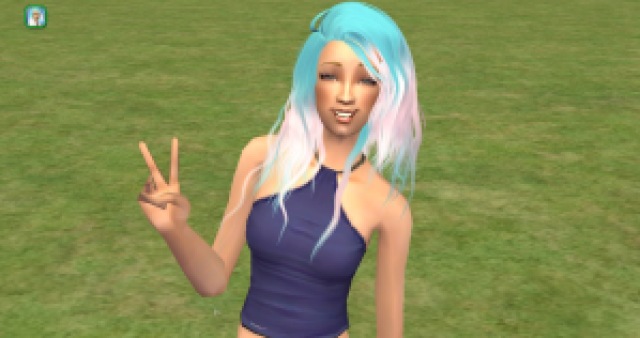 You should already be familiar with Azure Bifrost from my first post.  She’s living in Belladona Cove next door to the Poverty Challenge family.

Heh.  Yea, I built the “house” around her.  This is what the starting funds got, with a little left over which I had to spend on a desk since the little table wouldn’t work and a bookshelf leaving her with like 20 bucks.

The computer was free.  Yay!  She gets the highest paying job, the science career. 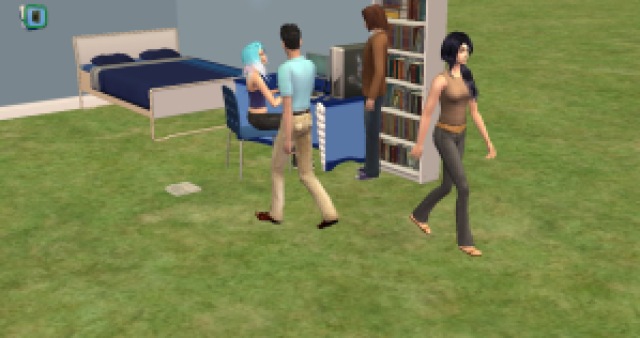 The welcoming commitee shows up soon after.  It’s Ellie Poe from the Poverty Challenge, her boyfriend Gabriel and a guy named Gilbert that she had negative attraction for but they ended up being best friends because he calls her constantly on the phone.

She’s promoted the first day on the job!  Time for some walls and floors.

She needs logic for her next promotion so I take her to Hunter’s Park in Bluewater Village.  But, despite sitting there half the day and playing chess with other sims she doesn’t get any logic.  Guess she’ll have to wait until she gets enough money for a telescope.

Dang telescopes!  If you use them during the day you’re basically spying on the neighbors.  Gabrielle was pissed. 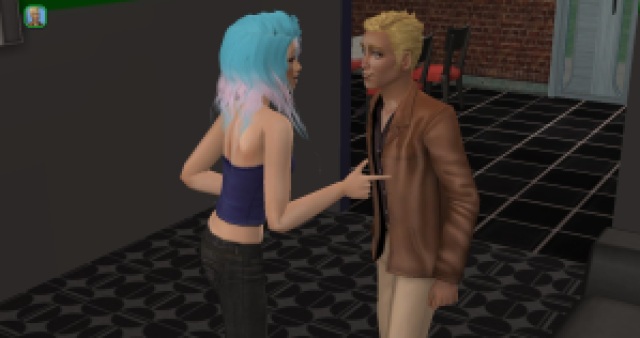 Since she had the day off I decide to take her back to Bluewater Village to look for a man.  She spewed hearts like crazy for Malcolm Landgraab and I was like oh that’d be so cool.  Alas, it was not meant to be.  He wanted nothing to do with her.  *pouts*

Okay, she met a couple of guys between Malcolm and Connor (pictured) but I forgot that I changed the key I use to take pics on the keyboard and I lost them.  Suffice to say they were all failed attempts.  One was married and I didn’t realize it until the end of the date.  Connor was outside reading her newspaper and she went to say hi.  They hit it off from the start.  It’s that beard stubble, hehe.  He moved in the next day bringing $7,208 with him.  Also, I forgot I have risky whoohoo in the game so they ended up pregnant the first time, doh. 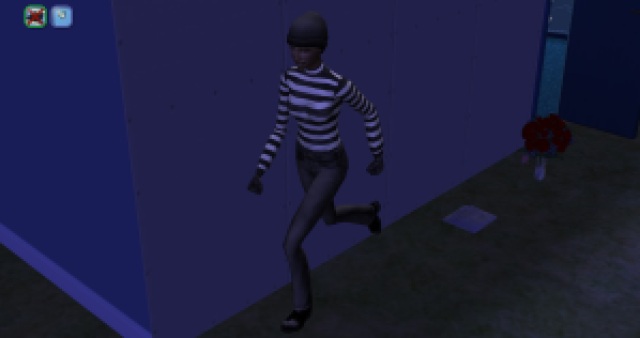 I forgot a burglar alarm.  The night Connor moved in they were robbed of the bookshelf and telescope.

But she wanted to get engaged!  What on earth.  Sorry about the walls, I was so miffed at her negative reaction to asking Connor to marry her that I forgot to put them up.  But, you get to see a preview of the purple baby bedroom! 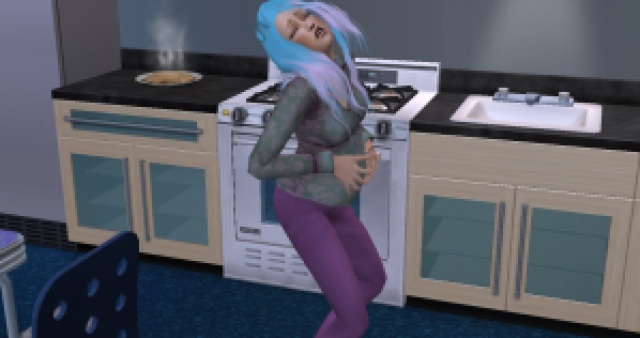 Wow that went fast.  Azure, that looks like it hurts!  Notice the purple maternity clothes?  I didn’t plan that, lol.

A baby boy!  His name is Tyrian.  Tyrian- The shade of purple is very rarely used, but is definitely an option that comes complete with a pretty common nickname: Ty.  It was also used in The Chronicles of Narnia, The Last Battle by C.S. Lewis and as the name of a tactical officer on Star Trek!

Now that the baby clothes are gone we can have a wedding.  Connor looks awesome with his blue tinted glasses.  *grins*

I was scraping the barrel for guests.  They’re only good friends with 2 of them.

This is the first time I’ve done cake in a Sims 2 wedding.  I had never realized you could before seeing it on someone’s blog.

At the speed of light it’s Ty’s birthday.  He looks a little brown for the purple generation don’t you think?

Soon enough baby Ianthe was born.  Yes, he’s a boy but I had the name picked out and I think Ian is a great nickname.  Ianthe- Greek name meaning “violet flower.”  In Greek mythology, this the name of an ocean nymph.
Chapter 1.2: Growing